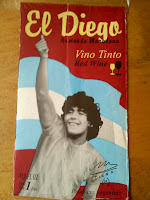 Anyone remotely familiar with fútbol, or soccer as we North Americans call it, would recognize the name Maradona.  It's synonymous with "the greatest" and "most excellent football player in Argentinian history, or possibly the world over".  What many of you do not know is that he has a wine named in his honor.
There are probably two ways to take this:
1.  He's so amazing at football that he can do whatever he wants in this world.
2.  He achieved such huge success that after retiring he became an alcoholic and thus a symbol of alcoholism, similar to Marilyn Monroe and something else.
I will let the reader decide this one.
What is my opinion of this fine wine?  An important thing to note is that it is sold in boxes and is not too expensive.  I guess we could say that despite his cheap appearance on the inside he's still good as ever.
Email Post
Labels: alcoholism appearances can be decieving Diego Maradona football fútbol red wine soccer vino tinto